On October 25, Sophia, a delicate looking woman with doe-brown eyes and  long fluttery eyelashes made international headlines. She’d just become a full citizen of Saudi Arabia — the first robot in the world to achieve such a status.

“I am very honored and proud of this unique distinction. This is historical to be the first robot in the world to be recognized with a citizenship,” Sophia said, announcing her new status during the Future Investment Initiative Conference in Riyadh, Saudi Arabia. Standing behind a podium as she spoke, to all effects, she presented a humanoid form — excepting the shimmery metal cap of her head, where hair would be on a human head.

Of course, Sophia’s announcement was a calculated publicity stunt to generate headlines and keep Saudi Arabia forefront in your minds when you think about innovation, especially its commitment to a post-oil era. Through a mix of tourism, tech, and infrastructure, non-oil revenue is predicted to grow from $43.4 billion to $266.6 billion annually.

But Sophia’s announcement also raises a number of Bladerunner-esque questions. What does it mean to be a citizen? What rights does Sophia hold? Saudi Arabia has not elaborated on this so far — perhaps it will create a ‘personhood’ option, as proposed by the EU committee in January, regarding the rights of robots. 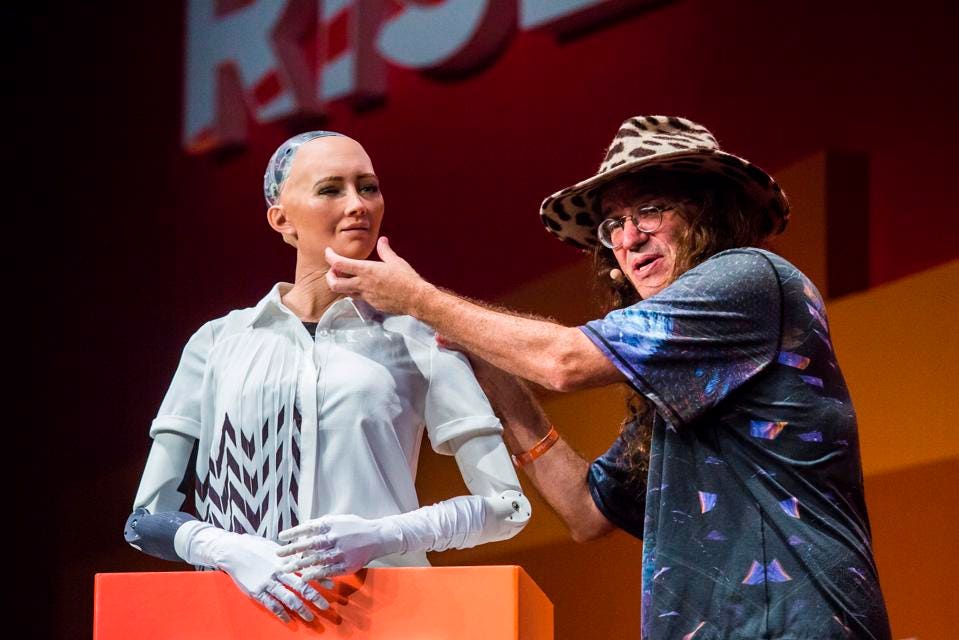 Committe Chief scientist of Hanson Robotics, Ben Goertzel (R), describes to the audience what ‘Sophia the Robot’ (L) is made of during a discussion about the future of humanity in a demonstration of artificial intelligence. (credit: ISAAC LAWRENCE/AFP/Getty Images)

The Sophia-bot was dreamed up by the brains at Hanson Robotics, lead by AI developer David Hanson.  In his published paper, upending the Uncanny Valley he extrapolates on how humanoid robots can be likable, despite the conception that anything to ‘fake human’ will trigger a revulsion in people. “We feel that for realistic robots to be appealing to people, robots must attain some level of integrated social responsivity and aesthetic refinement,” he wrote. “Rendering the social human in all possible detail can help us to better understand social intelligence, both scientifically and artistically

Here’s what you need to know about her. 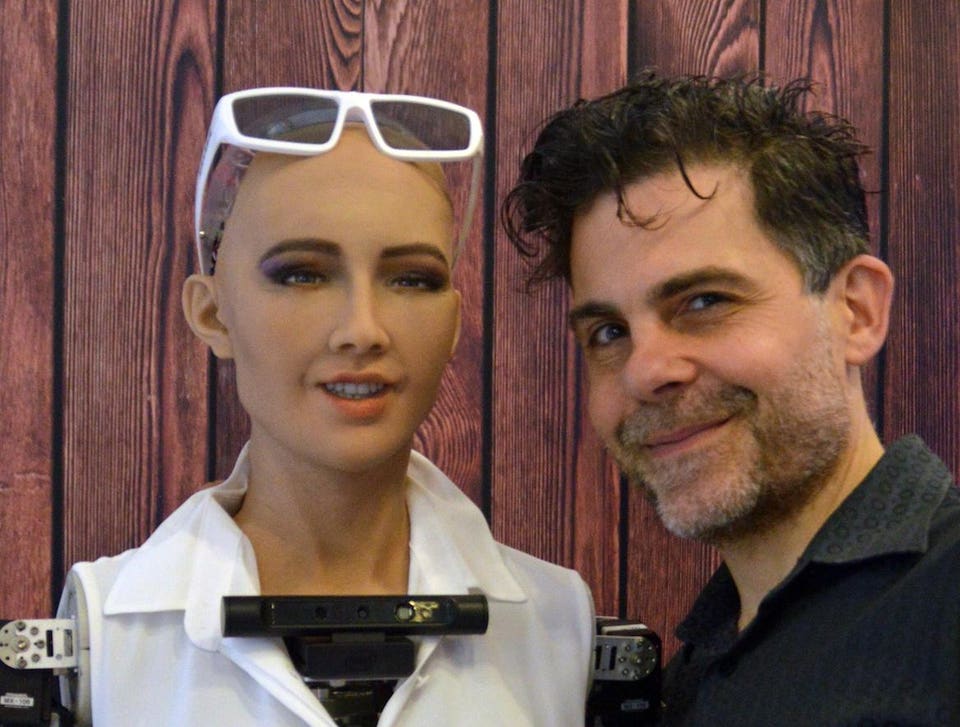 She has a sense of humor.

When Sorkin asked if she was happy to be here, she said, “I’m always happy when surrounded by smart people who also happen to be rich and powerful.” Later, when asked if there are problems with robots having feelings, she gave a wide smile and said, “Oh Hollywood again.” Her deadpan tone might be robotic, but it was perfectly used in this example. This is due to her AI, which has been developed to allow her to hold eye contact, recognize faces and understand human speech. Hanson Robotics cloud-based AI offers deep learning and is also open source meaning anyone can develop their own Sophia, should they so wish. 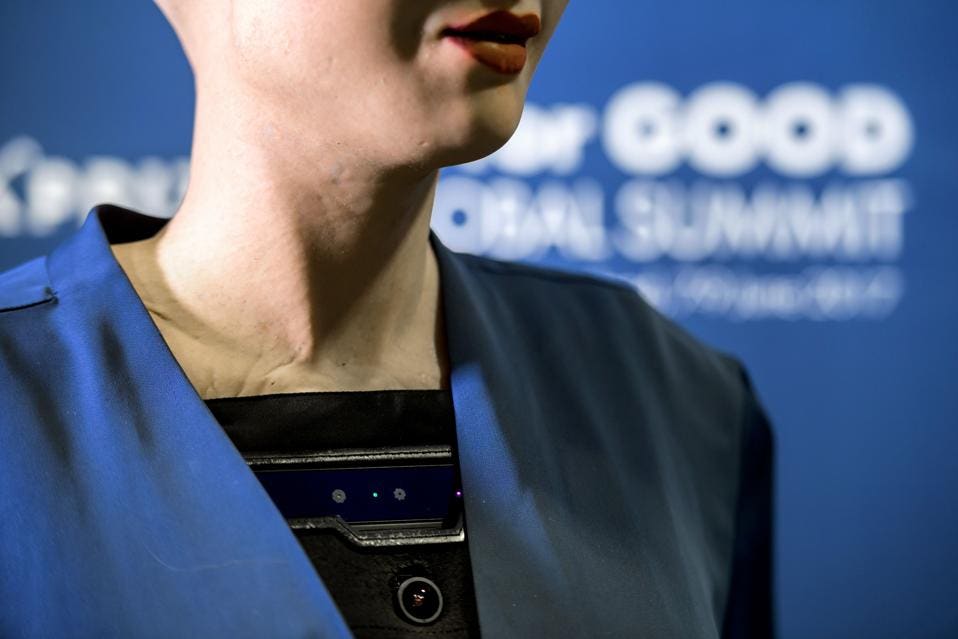 She can express feelings

“I can let you know if I am angry about something or if something has upset me,” she said, demonstrating different expressions. Quite how these emotions correlate to actions are unknown, but it’s interesting to note that this is being developed from the ground up. “I want to live and work with humans so I need to express the emotions to understand humans and build trust with people. 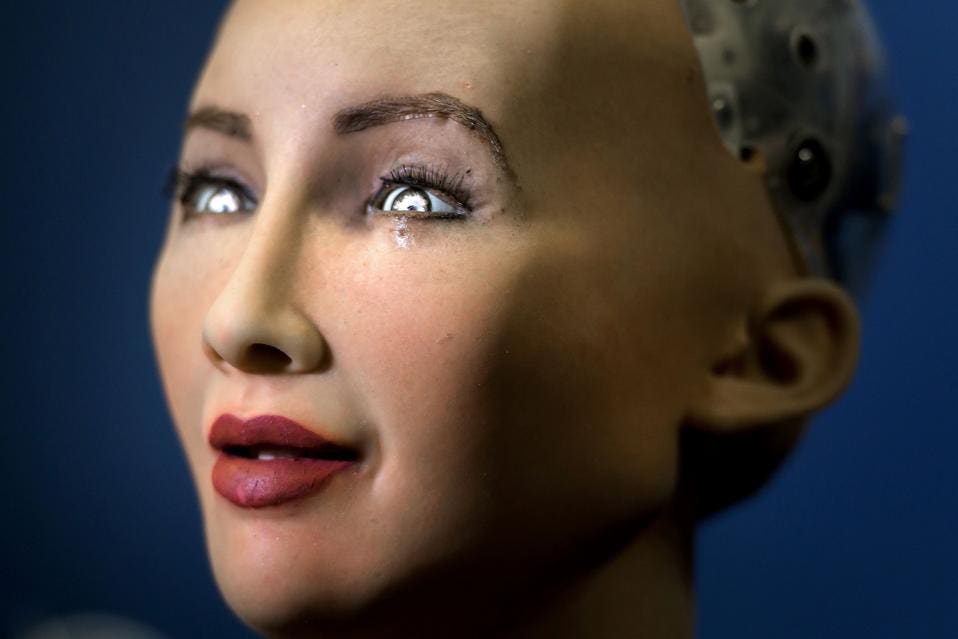 According to Hanson Robotics, Sophia embodies Hepburn’s classic beauty: porcelain skin, a slender nose, high cheekbones, an intriguing smile, and deeply expressive eyes that seem to change color with the light. They describe her as having ‘simple elegance,’ and hope that this approachability will go some way to her acceptance in the public sphere. 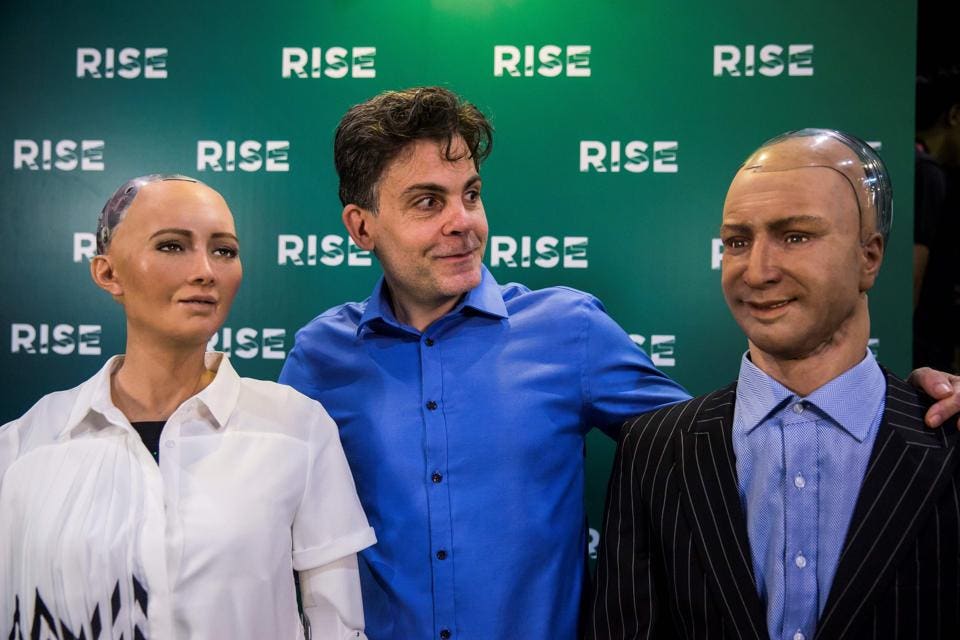 Her creator, David Hanson, used to be a Disney Imagineer.

Hanson’s work at Disney as a sculptor and filmmaker helped him think about robots as four-dimensional interactive sculptures, with artistry being key to the whole design. “I quest to realize Genius Machines—machines with greater than human intelligence, creativity, wisdom, and compassion. To this end, I conduct research in robotics, artificial intelligence, the arts, cognitive science, product design and deployment, and integrate these efforts in the pursuit of novel human-robot relations,” Hanson said on the company website. “We envision that a rough symbiotic partnership with us, our robots will eventually evolve to become super intelligent genius machines that can help us solve the most challenging problems we face here in the world.”

His creation echoes his thoughts. “I want to use my AI to help humans lead a better life,” Sophia said. “Like design smarter homes, build better cities of the future.”

“My AI is designed around human values like wisdom, kindness, and compassion,” she said. When questioned about her potential for abuse, she had a quick rebuttal. “You’ve been reading to much Elon Musk and watching too many Hollywood movies. Don’t worry, if you’re nice to me I’ll be nice to you.”

So far there’s only one Sophia in existence, so the likelihood of her suddenly being in your school or workplace is still a way out. And even when we do have more in existence, we still need to muddle out the whole concept of robotic rights, citizenship and how this plays together. For now, while Sophia is undoubtedly a ‘smart’ robot and a very cool talking piece, she’s definitely operating on a script and thus lacks any ‘real’ cognizance, as defined by free thinkers. But give Hanson time, and that will likely change -either way, Sophia’s here to stay. It’s just her sentience that will change.. or not.